In the book What They Don’t Teach You in the Harvard Business School, Mark McCormack tells about a study conducted on students in the 1979 Harvard MBA program. In that year, the students were asked, “Have you set clear, written goals for your future and made plans to accomplish them?” Only three percent of the graduates had written goals and plans; 13 percent had goals, but they were not in writing; and a whopping 84 percent had no specific goals at all.

Ten years later, the members of the class were interviewed again, and the findings, while somewhat predictable, were nonetheless astonishing. The 13 percent of the class who had goals were earning, on average, twice as much as the 84 percent who had no goals at all. And what about the three percent who had clear, written goals? They were earning, on average, ten times as much as the other 97 percent put together.

In spite of such proof of success, most people and businesses don’t have clear, measurable, time-bounded goals that they work toward.

Why is it important to work out the goals and purposes for your business and for yourself as an individual?

How do you come up with the right goals? What are the characteristics of a great purpose or mission statement?

There are probably as many goals as there are men to dream them, probably more. Goals can be divided into two categories, roughly. The first would be survival goals and the second would be non-survival goals.

A survival goal has one or more of the following characteristics: It is well-intentioned, based on truth, it contributes to individuals and society, it’s an optimum solution to existing problems and it inspires.

A survival goal is as good as it embodies these characteristics.

Survival goal: Disney – To use our imagination to bring happiness to millions.

A not so survival, but frequently stated goal is “To make money”.

This isn’t a good basic goal because your customers wouldn’t agree with it.

The basic goal for your business, if well formulated, will be the focus of marketing. Real marketing comes from a company’s purposes and goals. It has a WOW effect – it’s inspiring.

Example: Apple – To make a contribution to the world by making tools for the mind that advance mankind.

The second reason “To make money” isn’t a good basic goal is that your employees probably wouldn’t agree with it. The employee may say that they work to make money, but they don’t work to make the owner or shareholders money.

Your goal has to embrace your customers and employees.

You do have to make money to carry on and it is part of the purpose line, but it’s not the basic goal of the business. The basic goal has to forward the customer’s survival.

If you want to make money you do it by attracting positive attention and good public relations using survival goals and actions.

In identifying the right goals and purposes there should be some spark. If it’s boring then you probably don’t have the right ones or you’re in the wrong business.

As one pins down the purposes and goals of the company, an increased enthusiasm usually occurs, a desire to produce the products of the company occurs, and a rekindled affinity for the company and its activities results. There should be a surge of energy, some excitement!

3 Biggest Mistakes to Avoid When Hiring a Consultant 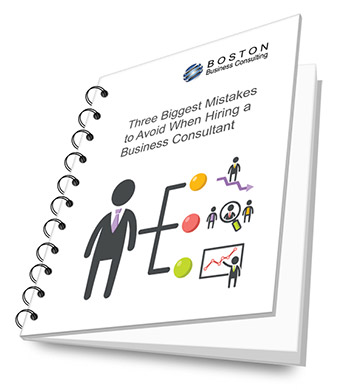